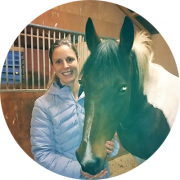 Dr Kirstie Pickles graduated from Glasgow Vet School in 1996. Following a year in practice, she completed a residency and PhD at the University of Edinburgh and then became a Senior Lecturer in Equine Medicine at Massey University, New Zealand. She returned to the UK in 2008 and has since worked in both private practice and academia. Kirstie is currently Clinical Assistant Professor in Equine Medicine at Nottingham Vet School and is passionate about teaching equine medicine and mental health awareness.

I knew I wanted to be an equine vet from age 10 and revolved my life around that decision until I arrived at Glasgow Vet School at 18. I enjoyed vet school immensely but found the transition to practice very difficult. The safety and structure of the close-knit vet school was poles apart from the 3 person, small animal and equine practice where I took a job, which was me and a husband and wife. In retrospect, they needed someone with more experience than a new graduate. My first bitch spay was a fat, 14 year old Bearded Collie with mammary tumours also requiring a mammary strip. I was shouted at for allowing a Collie I had performed a cystotomy on to biopsy a bladder mass to go home without a buster collar which later resulted in an out of hours call for the boss for licking the wound. There was frequently no other vet in the practice when I was performing these operations and I felt completely out of my depth. Unfortunately, I was also far away from friends and family in a small village and felt utterly isolated. I began to dread going to work and would wake up feeling sick and horrified that, after wanting to be a vet for so long, I absolutely hated it. Luckily, I spoke to a lecturer back at Glasgow and she encouraged me to leave as she could see how badly my confidence was being affected and so I handed my notice in after only 6 weeks, leaving after 12 weeks. At the time I was absolutely convinced that leaving my first job so quickly would blight my career. It sounds ludicrous now but at the time I really believed it. I went home to my parents feeling an utter failure. All my vet school friends were full of stories regaling how great their first job was, how they had just done their first calving, etc etc, and I was back home with my parents. My parents are the ‘soldiering on’ type and could not understand why I didn’t just get another job, but I was terrified and could not stop crying, which they were equally perplexed by. Looking back, I think this was probably my first (unrecognised) episode of clinical depression.

After a couple of months, I eventually took another small animal / equine job as I did not know what else to do and my parents were making it clear I was not staying there indefinitely. This was definitely more supportive and a better choice, but I still felt incredibly lonely and was constantly fearful of making a mistake and not knowing enough. It was this latter feeling that led me to apply for an equine residency programme at Edinburgh Vet School a year after graduating. I am eternally grateful that Prof Paddy Dixon saw something in me and gave me the opportunity to work with him. Although I still battled with imposter syndrome, I was back in the safety net of a structured programme and a team working environment. I found I loved teaching and I was excited by research, which led to a PhD after my residency. By the time I finished that, I realised that in academia, I had found my calling within the veterinary profession. I was married to a Kiwi by now and so it seemed perfect when we both landed jobs in New Zealand. I began teaching at Massey University Veterinary School and that’s when my imposter syndrome really kicked in. I had tried to drown it in degrees and had racked up an MSc, PhD and Certificate in Equine Medicine by this point but still felt a fraud and so followed up with a European Diploma. Then I would know enough, surely? It seemed not. I did seek some talking therapy and help via a GP but after 12 months I was really struggling and having frequent panic attacks. At the same time, my marriage was struggling, and I began to self-harm to cope with the overwhelming shame and distress that I felt. I had always been a heavy drinker, enjoying the relaxant effect of alcohol, and now I used it to numb the emotional pain. After a fairly serious self-harming incident which led to hospital treatment, I was referred to a psychiatric service. This led to several months off work followed by a very gradual return and extensive psychological counselling with the most amazing psychologist who I think, quite possibly, saved my life.

When I left NZ several years later, I knew a lot more about myself and my triggers but have still continued to suffer with anxiety and repeated, intermittent, sometimes serious bouts of depression despite medication and much psychotherapy. I now don’t drink at all and find this is a massive help for my mood although I do struggle a lot more socially without it. I am now re-married to an amazingly patient, kind man and am the mother of two wonderful children. I find juggling work and parenting exceptionally hard and find part-time working the best compromise for me. When my daughter was diagnosed with autism last year, I began reading everything I could about it and found I identified with a lot of what adult autistic women described. The anxiety, the feeling different, the saying the wrong thing, being taken the wrong way, having to hide my true self, emotional overwhelm – so much of it resonated with me. I have subsequently been diagnosed as having high functioning autism (previously termed Asperger’s), like my daughter, and now a lot of my past makes a lot more sense. And this is actually very comforting because I now understand why I felt different and struggled all those years and now I can take steps to better protect myself from relapse. Whether my anxiety and depression is solely the result of being autistic in a neurotypical world (it’s tough) or are co-morbidities in their own right is unclear, but everyone is agreed, autism and depression are frequent bedfellows and they do not help each other.

I am very open about being autistic, both to help myself stay well and reduce my triggers and also to encourage other people that it is ok. Camouflaging (masking) autistic traits is very common, particularly in women who do it unconsciously to fit into societal expectations but is incredibly hard work and emotionally draining. I can appreciate that certain autistic traits have helped me get to where I am; incredible focus, attention to detail, good memory (at least until I had kids!), determination, persistence, efficiency and organisation, fierce loyalty, integrity, and a hard work ethic. However, I also now realise that my social anxiety, crippling self-doubt, perfectionism, rigidity of thinking, need for order, and difficulties in understanding some nuances of communication are also part of the deal. I am still learning how best to accommodate my autism in my life. Practice can be difficult for autistic individuals due to the unpredictability of clinical work and out of hours emergencies and I certainly found this very stressful. Academia allows me to maximise my strengths and I work within a great team that value my contribution and tell me so. Perhaps this most of all helps silence (or at least quieten) my imposter syndrome.

Privacy notice: This site uses cookies, which we use to collect anonymised statistical data to improve your experience, and not for marketing purposes. If you continue we'll assume you are happy to receive them. Read our cookie policy
Autism and the veterinary professions