You are here: Home1 / blog2 / Mind Matters presents in Sweden 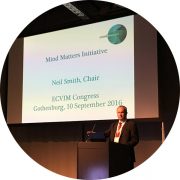 The organisers of the European College of Veterinary Internal Medicine – Companion Animals (ECVIM-CA) kindly invited MMI to present at their annual conference in Gothenburg in September.

This conference is aimed at veterinarians throughout Europe who are either studying for diplomas in a range of veterinary internal medicine disciplines, or have already achieved them. It was therefore great that the organisers introduced the ‘non-core’ subject of mental health and wellbeing into their programme.

Talking to delegates during the conference it was clear that they were aware of mental health issues in the veterinary profession, and were very interested in hearing about the RCVS -led initiative. It is clearly a subject that is considered important by the profession in many countries.

My talk was better attended than I expected, competing against a range of fascinating clinical streams and being towards the end of the meeting. It was well received, and there were a range of interesting and relevant questions at the end. There were also a number of people who came and talked to me privately afterwards.

Following my presentation the conference organisers had organised Tim Sweeney to run some mindfulness sessions. Tim is a mental health nurse who specialises in mindfulness, and his practical introduction to it was very positively met.

Gothenburg is a fascinating and interesting city, and the conference was very well organised, with plenty of networking opportunities and excellent CPD. We have already received an indication that mental health will be on the agenda at the 2017 conference, in Malta, so it’s fantastic to see the topic being given some prominence.

Privacy notice: This site uses cookies, which we use to collect anonymised statistical data to improve your experience, and not for marketing purposes. If you continue we'll assume you are happy to receive them. Read our cookie policy
New SPVS/Mind Matters Wellbeing Award