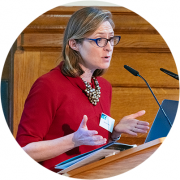 Delegates from across the international veterinary profession attended the Second Mind Matters Research Symposium at Church House in Westminster on Tuesday 24 September, where the focus was on the evidence-base for mental health problems in the veterinary profession, and how to best prevent and treat mental ill-health and poor wellbeing.

The event was opened by Lizzie Lockett, the Director of the Mind Matters Initiative (MMI) and RCVS CEO, who welcomed the almost 100 delegates who had come from across the UK and as far afield as Canada, the United States and the Netherlands.

She then handed over to Professor Stuart Reid CBE, Principal of the Royal Veterinary College (RVC) and, until July, Chair of the Mind Matters Initiative. In his plenary speech Professor Reid gave an overview of the highlights of the first five years of MMI including the fact that it had:

Professor Reid estimated that, taking into account all the various different strands of the initiative, MMI had come into direct contact with around 5-10% of veterinary profession but, through its destigmatisation, wellbeing and awareness-raising work, potentially many more members of the professions.

Professor Reid said: “One thing which I think we can all reflect on and appreciate is how different the conversation is around mental health from even five or six years ago. There is a greater openness from all parts of the profession around talking about their own mental health and thereby encouraging workplaces to put in place preventative wellbeing and mental health policies and persuading those who may be experiencing mental ill-health or distress to seek help.

Lizzie Lockett, giving an example of the Initiative’s impact, added: “There was a recent article about the fact that there was a 500% increase in calls to the Vetlife Helpline despite all that’s being done around mental health. But I think we should look at this in a positive way – there has been an increase in calls because of all we’re doing with Vetlife, Mind Matters and other projects and so people feel more confident and supported to seek help before they reach a crisis point.”

The event then split into two streams of research presentations – these were:

After the research sessions the delegates assembled for the second plenary talk from Dr Alexandra Pitman (pictured), an Associate Professor in Psychiatry at University College London, who spoke about the sensitive topic of the impact of suicides within the veterinary profession on colleagues. After giving an overview of rates of suicide and their impact on colleagues, family and friends across the general UK population, she focused on some of the specific issues and challenges with veterinary suicides.

She hypothesised that factors relating to suicides amongst vets specifically might include work overload, unrealistic client expectations and complaints, practice/ business responsibilities in addition to clinical work, and co-occurring life events such as bereavement, and relationship problems.

She also gave advice to veterinary professionals on suggested approaches to suicide prevention, how best to intervene if a colleague is feeling suicidal, and how managers should approach staff wellbeing in cases where a colleague has sadly taken their own life. For the latter example she emphasised that support must be offered to all practice staff, as well as key clients that may have had long-standing friendships with the colleague, and arranging a reflective event in which all staff can talk about what has happened and to gauge how they wish to be supported.

The second was from Rachel Malkani, a PhD student at the University of Surrey’s School of Veterinary Medicine, and Professor Sarah Wolfensohn, Professor of Animal Welfare at the same school, on whether the Animal Welfare Assessment Grid (AWAG) tool could help veterinary surgeons make well-reasoned and ethically-justified decisions regarding end-of-life treatment for animals.

The third plenary speaker was Professor Neil Greenberg, a former psychologist in the Armed Forces and now Professor of Defence Mental Health at King’s College London, who spoke about the evidence-base for how to best sustain resilience at work. He said that research suggests that while work is probably a positive factor for wellbeing, work pressures and stressors can also be a significant source of poor mental health and wellbeing.

Professor Greenberg said that, while a range of mental health issues can impact everyday working life, there are significant barriers such as stigma and lack of available services and it is therefore important for workplaces to look seriously at prevention. Preventative measures that he recommended include having a clear policy that sets the culture, outlines responsibilities, and details support; training leaders so that they understand the issues and how to best support staff in these circumstances; and forging mutually supportive teams, as he said that resilience is often formed between individuals rather than within them.

He also weighed into current debates around ‘pre-screening’ of individuals for resilience before they join or train for certain professions and said that there is no evidence of correlation between certain personality types and incidence of mental ill-health and no evidence that any sort of screening is effective in this regard.

Following Professor Greenberg’s plenary speech, the delegates once again split into two separate research streams. The research presentations held in the afternoon were:

Following these final research presentations the delegates reassembled for a closing speech from Professor Susan Dawson, Head of the Institute of Veterinary Science at the University of Liverpool, and Professor Reid’s successor as Chair of the Mind Matters Initiative.

Speaking after the event, Professor Dawson said: “This event demonstrated that, both within the UK and internationally, we are starting to see the evidence being gathered about the causes of mental ill-health and poor wellbeing in the veterinary professions, but also around what works in terms of increasing wellbeing and preventing poor mental health outcomes as well as intervention and treatment.

“Although there is plenty more work to be done to build up the evidence base and to reach out to the profession to encourage further awareness and destigmatisation, we also shouldn’t be afraid to celebrate what we have achieved so far within a relatively short space of time.

“These achievements have largely been because of collaboration amongst organisations and educational establishments – there is no space for competition in such a critical area as we are all in this together. I have also been struck by the benefits we can get from bringing in people from other professions and looking at the issues internationally so that we can learn from some of the similarities and continuities, as well as some of the key differences.”

The full agenda from the day is available to view and videos of the proceedings, as well as a full written report of the day, will be made available on the website in due course.

https://www.vetmindmatters.org/wp-content/uploads/2019/09/dr_alexandra_pitman.png 402 402 MMI Press Office https://www.vetmindmatters.org/wp-content/uploads/2015/10/mm-sphere-logo.png MMI Press Office2019-09-30 12:13:002020-09-10 12:26:37Second Mind Matters Research Symposium focuses on the international evidence-base
Privacy notice: This site uses cookies, which we use to collect anonymised statistical data to improve your experience, and not for marketing purposes. If you continue we'll assume you are happy to receive them. Read our cookie policy
RCVS and SPVS launch Vet Wellbeing Awards 2019